Merry Christmas, Felize Navidad, Joyeaux Noel, and any other sentiment that says have a wonderful holiday.  Hopefully, you're spending it with family and friends. If not, remember those Christmases past and dwell on the wonderful memories.

Remember to think of those who are on duty today, to those whose situation doesn't allow them to celebrate, but most of all be grateful for what you have or have had.  Chances are you're luckier than most.

Now for the story, this is one of my favorites. 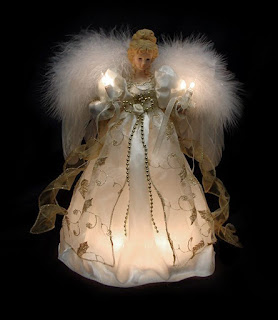 Her thin blue-veined trembling hands placed the angel gently in its place at the top of the small tree. It had seen better days but to Agnes, it was still as bright and fresh as the day she and her John placed it atop their first tree. When it was just right, she sat down in her rocker and closed her eyes.

In her dreams, she was a young girl walking down the street carrying gifts for her family when a young man bumped into her causing the packages to fly up in the air and land every which way.  He was so apologetic as he helped retrieve her packages and expressed his hope that nothing was broken.  By way of a deeper apology, he invited her to share a hot chocolate with him at the café on the corner.  She accepted and he helped carry her packages and set them down at a sidewalk table.  Agnes couldn’t help but notice how cute he was.  He had to be about her age with reddish-blond curly hair, cornflower blue eyes and smattering of freckles.  He was wearing one of those slouch caps that were so popular at the time and when he removed it, his curls escaped giving him a cherubic look. His smile showed the whitest teeth ever and when he spoke his voice was so melodic she never wanted to stop listening to him talk.

They sat there for hours, her listening to his captivating lilt and him staring at the most beautiful girl in the world. The snowflakes that dropped from the sky, settled on her eyelashes, giving an extra twinkle to her eyes and when she smiled at him, he knew she had been sent from heaven; she was his Christmas Angel.

It was time to go, but neither of them wanted to leave the café and break the magic they shared. She invited him to spend Christmas Eve with her and her family.  He told her as much as would love that, it was only his Mam at home and he could not leave her alone on Christmas Eve.  Agnes extended the invitation again and included his mother.

The Cochrane house was bursting at the seams when John and his mother arrived.  Besides Agnes, there was Rose, Billy, Tommy, Catherine and Sean, along with their spouses and their children, Uncle John and Aunt Sarah, and Agnes’ mother Lily and dad, Shamus. They were a loud boisterous bunch with each one trying to be heard over the other but when Agnes introduced John and his mother, all activity stopped.  Agnes had never brought anyone home before.  All eyes focused on John and the sparks that flew from John to Agnes did not go unnoticed by anyone in that room, causing Shamus to remark that by next Christmas, he had a feeling his little Agnes would have a new name. Agnes’ cheeks burned with embarrassment but John merely went to her,  took her hand in his and brought it to his lips.  A chorus of oh’s and ah’s spread around the room.

Shamus’ prediction came to pass in July of that next year. When Christmas rolled around, she and John were shopping for presents when John spotted the tree topper.  It was an angel with golden hair and white gossamer wings.  Although way out of their price range, he told Agnes they had to have because it reminded him of her and what he thought the day they met, that she was his Christmas Angel.

Year after year, decade after decade, the Christmas Angel was carefully packed away to be brought out to stand atop their tree.  Every year, it was the last decoration to go on the tree and as soon as it was perched in its place, their little ones would clamor to plug in the lights and watch the tree glow and come alive with the Angel watching over all of them. The children would beg to have their daddy tell the story of how the Christmas Angel came to be.
_____________________

Agnes woke, startled by the sound of Christmas Carols, somewhere down the hall.  For a moment she wasn’t sure where she was but when she looked at the tree and saw the Christmas Angel, she knew she was safe and John was near. She felt his arm around her as he whispered “Merry Christmas, my Angel.”

She was soon surrounded by her family, they came from far and near, children, grandchildren and great-grandchildren alike to be with her this Christmas.  It was the first time without her beloved John and they knew it would be a difficult one for all.  As each of them came to offer a Christmas kiss, the Angel seemed to throw off a special glow until the room was filled with a white light and the Christmas Angel glowed brightest of all as beautiful as it was those many years ago.


May the blessings of this season fill your hearts with joy that continue throughout the year.

Posted by Aimless Rambling at 12:00 AM