I enjoyed the re-read of this one myself - Hope you do too. 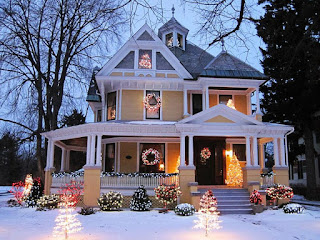 We were finally finished. 444 Shady Elm Drive was festooned in her holiday garb for the last time under our ownership.  Barry carried me over the threshold as a young bride more than forty years ago, and every Christmas since we would drape fresh pine, fairy lights, and red bows across the width and breadth of her welcoming arms.  We stood back and admired our handiwork.  Next, we would decorate the tree that stood sentinel on our front porch.  Berries, strings of popcorn, and packets of birdseed tied to the boughs would welcome our flighted friends.  Here’s where the kids would put out the reindeer food as a welcome to Santa’s friends. Every inch of this house provided a loving memory, but it was time for Barry and me to begin another chapter in our lives.
The stately Victorian lady was a beauty and the porch is what sold me on the house all those many years ago.  It was more house than we needed or could afford at the time, but we managed. The previous owners worked with Barry and held the second mortgage because they wanted to sell to people who would love the house as much as they had.  We were that couple.  We spent lots time and money keeping her beautiful as she aged along with us.

It wasn’t always easy, but Barry held my feet to the fire (or should I say lit my bottom on fire) many times over the years when I overspent our very carefully crafted budget.  Once our son came along and I was a stay at home mom I had to economize even further, and Christmas time was always a red-bottomed time for me.  It was very difficult not to overspend our budget, not only on presents but on making the house a beautiful tribute to Christmas.

All of those memories came flooding back as we worked.  This year, when the Christmas decorations came down from the attic, they wouldn’t  be packed up and stored for the following year. This year, our children and grandchildren would be urged to pick out their favorite item and take it with them.   There were very few exceptions – things I couldn’t part with no matter what the consequences, then or now.

Things like the twelve piece Dresden Nativity set I purchased our second Christmas.  I was still working and planned to have it paid off before Barry knew the true cost.  Unfortunately, our son came along before that happened.  When Barry saw the bill and what was still left to pay, there was hell to pay.  I not only received my very first belt spanking that had me sitting on a welted bruised bottom for days and somewhere in our memory box is an essay on trust among husband and wife.  That was as difficult to write as the spanking was to bear.  The pages became tear-stained as the lesson became clearer as the words filled the page.

The first year we were married, Barry purchased this God-awful angel as a tree topper.  Gaudy doesn’t even begin to describe it but Barry loved it and for years it adorned the treetop.  He would lovingly gaze at its gaudy beauty and hang it in its place of honor.  It reigned supreme for ten years before I couldn’t stand looking at her any longer.  I found an angel to take her place and replaced his angel while he was at work.  He may never have noticed until our daughter, bless her heart, commented on how beautiful was our new angel.  A battle ensued, ending with the warning that the old angel better be back in place or my ass would be toast.  Since I’d burned the old angel, my ass was, indeed, toasted to a crisp. That essay on respecting your mate’s desires and personal possessions is also in the memory box.

We came inside as the day began its journey into night. Barry lit a fire, put on the old Christmas albums, and we started the task of decorating our inside tree.  Years before, Barry finally convinced me that it would be much more convenient to have an artificial tree. And here’s the reason for the next Christmas bottom warming memory. After much searching, I found one that I thought would make me happy.  It was a seven-foot beauty, with over a thousand pre-strung lights and the price tag was in the range of the lights.  My reasoning was that we would have the tree for years and if we amortized the cost of what we would spend yearly on a real tree, it was a bargain.  Barry didn’t agree – I was over his knee getting my backside warmed before the first ornament was placed.  We still have the tree and for years Barry reminded me of how expensive it was by giving me the number of spanks amortized through the years.  Another essay on how we were never to spend more than $200 without first consulting the other partner is boxed along with the others.

The box with the Santa Claus suit was set aside for our oldest son.  Obviously, it hadn’t been used in years, and when we pulled it out, Barry and I both laughed.  He found the suit in a used clothing store and as a lark decided to buy it to play Santa Claus for our kids.  That night, when the kids were in bed, Barry tried on the suit.  We were teasing and playing around, and he was telling me what a naughty girl I was and how naughty girls were spanked.  There I was, sprawled over Santa’s lap, getting my bottom spanked when our son walked into the room.  He came over and started pummeling Santa with his little fist telling him to leave his mommy alone.   What a snow job Barry thought he did to convince our little one that he must have been dreaming.  It wasn’t until years later that our son confessed that he knew it was Barry all along and said he’d learned a valuable lesson that he carried forth into his own marriage.

Then there were the ornaments we purchased each year, reminding us of a special vacation or events in our life – ballet slippers, ice skates, a Hawaiian beach shirt, a cap and gown and the infamous cheese board (paddle) Barry purchased the same time he bought the infamous Christmas Angel.

Once the tree decorations had all been placed, the lights lit, the Nativity Scene arranged under the tree, Barry and I sat back to admire our hard work.  We were exhausted, but there was one thing left to do.

He bared my bottom and placed me across his lap.  “Now let’s get this bottom in the Christmas spirit,” and he began to spank so that I too was decorated in red for the holidays.

We just experienced the best Christmas ever.  Everyone was here, we all got along, no sibling rivalry, no hurt feelings, just plain fun.  Maybe it was because it was the last one in our home.  By next year, another family will be living here, making their own memories.

A couple of memorable things happened.  Our eldest son dressed in Barry’s old Santa suit and enacted the role.  Once it was dark and the children down for the night, he knew his eldest was not entirely asleep yet.  He went outside and made noise knowing his son would come to the window. The little one was sure Santa wasn't real but still wanted to believe the fantasy.  Seeing Santa made him a believer for another year at least.  On Christmas morning, he was wide-eyed with wonder as he told his sister and his cousins all about seeing Santa.  The best part was the deer came to feed, sometime during the night and all the reindeer food was gone from the front yard and deer tracks everywhere.

Another thing was watching and listening to each of our children’s special memory of Christmas in our house. There were so many remember when's we lost track. We played a game in which everyone chose a tree ornament and at Christmas dinner had to tell why it was special to them.  It was fun listening to the stories, especially the youngest ones.  The tears and laughter rang heartily when Barry shared the story of the flying turkey, or the time I almost burned down the house by burning dried out pine boughs in the fireplace,  and my husband hefting that large video camera on his shoulder, so it was all caught on tape.  Now, everyone’s phones captured the moments.

When everyone left they took their special ornament with them with promises to return in a day or two to help us de-Christmas the house and get it ready for sale.  Barry and I sat in the room and gazed around and held tight to each other while we thought about what we had created.

I happened to look down at the tree and spotted a package, hidden at the back of the tree, that hadn’t been opened.

I got up, went over and picked it up.  The box wasn’t very heavy, or big but it was beautifully wrapped, and the card had my name in big bold letters.

“Maybe, there’s a card inside,” Barry answered, with not a telltale clue on his face.

As I carefully unwrapped the present, tears started falling as I spied what it was.  There, in my lap, was a leather-covered book with gold lettering titled “Lessons Learned.”  Inside were all the essays he had me write through the years.  The last page was an essay, written by him, explaining why he loved me so and how important I was to him and our family.

Once the sobs subsided, he attempted to carry me upstairs, but I’m not as feather-light as I once was and I could see the strain on his face.

“Put me down, darling.  Save your strength for when we get to the bedroom.”

He laughed.  "That's one of the many reasons I love you so." He slapped my fanny and we climbed the stairs together.


"And that's one of the reasons I love you." I told him as I gave him my special wink.

As Clement Moore said in his last line, Merry Christmas to all and to all a good night.
Posted by Aimless Rambling at 1:30 PM