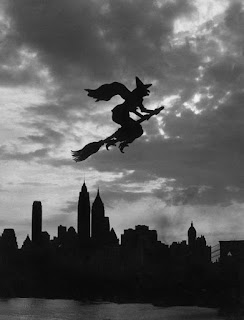 Once a year, Ellie came alive.  The rest of the year, she had to shine her light under a bushel.  Halloween was the only time she could come out to play and use her own name, Eldora and live freely without hiding her real self.

People always thought her strange.  After all, she lived in the musty old cottage at the edge of the wood and grew all sorts of things.  There was always something strange hanging from the rafters of her back porch.  Of course, not many people ventured to the back porch.  The cottage backed up to the woods and children, from a very young age, were urged to stay clear because nothing good came out of the woods.  She had very few friends except for her black cat, Beezee and her parrot, Tikka.  A few of the townsfolk would come by to purchase some of her herbs and occasionally she was called upon to make up a poultice for someone’s festering sores, or bring down the fevers of some of the townsfolk, otherwise, she was left alone.  Once in a while, some children would come to taunt her but she would cover them in white light and they would be on their way.

Every year prior to Halloween, Ellie would make it known she would be away visiting and that a friend of hers would be watching out for the cottage and Beezee and Tikka. She didn’t think most people would even notice but just in case, she perpetrated this lie every year. In reality, it was just Ellie turning into Eldora.  She could be herself, a witch, but people would be frightened of a witch living in their midst all the time but somehow, at Halloween, it was okay because she would be gone as soon as the holiday was over and Ellie returned.

Ellie or Eldora had been living this way forever.  No one seemed to think how odd it was that she never grew older, the truth was they didn’t much care as long as she stayed to herself.  One year, prior to Halloween a special visitor came to call.  Ellie was startled, he came through the back door and just materialized in her kitchen.  She went to check the door. It was still closed and locked.

“How did you get in?” She inquired.

“Unlike you, I use the powers I have been granted all the time.”

“And what are you doing here?”

“I was sent by your forbearers to make you see the error of your ways.”

“Whatever are you talking about?”

“You have been granted special powers, yet you hide them.  These powers were given to you to share with the world, but you only bring them out sparingly and then only once a year. I’ve been sent to help you correct those bad habits.”

“But the people don’t know I’m a witch.  They’re afraid of witches and ghosts and such.  Anything they cannot see, or feel or touch frightens them. I’ll help if they ask but I don’t want to impose;  I only want to live peacefully here in my little cottage with Beezee and Tikka.”

“Not anymore.  I’m here to see you share your gifts as they are meant to be shared.  From now on you will always be Eldora.  Ellie no longer exists.”

“I’m here to give you the courage and incentives you need.  Now come to me.”

Ellie stepped forth.  She was as meek as the mice that lived in her attic.  The visitor morphed into a handsome man, tall and tanned, with shiny black hair and sparkling black eyes that peered into her very soul.

“My name is Cade.  I was once where you were until centuries ago, one of your ancestors taught me to be all that I am.  I am returning the favor.”  He took her in his arms and kissed her.  It was the first time, Ellie had ever been kissed.  Is this the kiss of the prince and he’s turning me into a frog, or is he the frog. He released her and as she stepped back from him, she was happy to see neither of them had physically changed. Emotionally, was a different story.  She felt young and pretty and full of lust for this handsome stranger.

“Cade, can you kiss me again?”

“I’m going to do more than that Ellie.  I’m going to impart lessons you will remember.  These lessons will be repeated until you realize your full potential as a witch, not just at Halloween but throughout the year.”

“So will you be staying with me permanently to teach me?”

“I will be with you until the lessons are learned and firmly instilled in your mind and body.”

“When will these lessons begin?”

“Right now, come with me.”  Cade took Ellie to her bedroom.  He sat on the edge of the bed, pushed up her skirt and pulled down her pantalets.  “This is going to hurt, but it must be done,” he told her as the first smack rained down on her creamy white buttocks.  She winced as the force of the slap registered in her brain and on her body.  The next smack came just as forcefully only this time she was not as shocked.  He delivered each succeeding stroke with an enforcing statement.  After thirteen spanks, her bottom was throbbing and pulsing and her mind reverberated with every lesson imprinted by his hand on her backside.

When he finishes the spanking and stood her up, she realized she was more Eldora than Ellie.  Cade kissed her and that kiss sent her into tailspins.  They kiss and the spanking had awakened desires she never before experienced.

“Sleep now, and dream about Eldora.  I will return if you need any more lessons.”

Instead of dreaming about Eldora, Ellie thought about Cade and how many more lessons she would need before she was fully schooled. Somehow, she didn’t think she would ever learn enough.

Happy Halloween everyone – do you have an Ellie living in your neighborhood?

An Oldie brought forward for the holiday.  Do you remember?

Everybody Loves a Meme

*
Is anyone still around?  I've turned into one of those lurkers.  Once in a while I'll think I should post something and then weeks go by.  I've even saved a couple of posts in draft , so who knows, you might hear from me again before the year is out.  My cousin posted this meme and I just had to share.

How old are you backwards: 47 until the end of the week* Surgeries: yes* Tattoos: yes
* Ever hit a deer: no
* Rode in an ambulance: no
* Ice skated: yes
* Rode on a motorcycle: yes
* Stayed in hospital: yes
* Last text call: Pam
* Last text message: Reminder about bocce ball today
* Watched someone die: yes
* Pepsi or Coke: Neither - but Iike Pepsi a bit better
* Favorite pie: Lemon Meringue
* Favorite season: Fall
* Broken Bones: yes
* Received a ticket: yes
* Favorite color: red
* Sunrise or Sunset: both - they both mean I've lived another day
* Ocean or mountains: Ocean
* Breakfast or Dinner Date: Definitely dinner
* Iced or Hot Coffee: Both

I'd change the background but I no longer remember how.  So Sad