Revelations on a Moonless Night, A New Story


Revelations on a Moonless Night 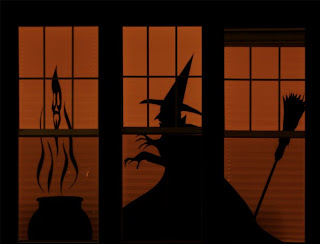 Michael and Melissa McCandless loved Halloween.  They met at a Halloween party, were married on Halloween and hosted the biggest and best adult Halloween party every year since. They lived on a country lane in an old farm house they have been renovating since moving in twenty years ago.  The setting was perfect for their parties. Their driveway was lined with trees from which they hung cobwebs and fairy lights illuminating the ghostliness of the bare trees. Walking on the dried fallen leaves and hearing the wind whistle through them gave a haunted feel.  Candles flickered in the blacked out windows and occasionally an object would jump out to scare the daylights out of “newbies” and those faint of heart. Eerily carved pumpkins were scattered along the porch.  Costumes were mandatory and anyone not wearing a costume was led to a closet filled with past year’s costumes to choose one for the evening.

Inside all the rooms on the main floor were decorated to the hilt.  There was the usual mortuary room with a coffin filled with a body that would sit up when someone got too close, the dungeon where all sorts of torturous sounds emanated from unworldly creatures, the parlor where seating was available if you didn’t mind being accosted by a skeleton or finding a very large spider (fake, of course) crawling down from the ceiling to roost in your hair or dangle in your face.  The backyard featured a cemetery complete with fog and ghost-like creatures walking among the graves.  A carnival type tent with a gypsy motif provided the backdrop for fortune telling and séances. Speakers allowed the ghostly organ and classical music to be heard throughout the property.  Most of the party-goers would go from room to room and then settle on the back deck.  It was the most mundane part of the house.  Orange and black twinkle lights were strung on the ceiling, roof and along the railings and walkways.  The party food could consist of eyeballs (green peeled grapes) deviled eggs, vampire worm pasta (spaghetti with garlic sauce) monster claws (chicken fingers dipped in barbecue sauce) mummy bread, volcanic punch and anything else ghoulish.

Every adult in town was invited.  Babysitters had long standing dates to be available the night of the party.  One of the day cares in town actually featured a special offering overnight care for any parents interested.  Costume planning began in early summer because in a town their size the pickings got mighty slim as Halloween approached.   There were always prizes for the most original costumes and this year Mike and Melissa thought it might be fun if each person had to give a biographical sketch about their costumed character.  This would be included in the list of rules for the prize winner. No revelations were made until after the winner(s) was chosen and all party goers were unmasked at midnight.

Melissa hadn’t realized why Mike had chosen for them to be the Blondie and Dagwood Bumstead until he had to share his story.  Even though everyone was masked most people really knew who you were and when he revealed he had chosen Dagwood because he got to spank Blondie.  Everyone started to laugh, clap and some of the men slapped Mike on the back saying they understood just what he meant.  Melissa was mortified and ran from the room.  When she hadn’t returned in what Mike considered a reasonable length of time he went searching for her. He found her in their bathroom crying.

“What’s the matter? He asked

She picked up the box of tissues and hurled it at him, catching him just above his left eye.

“How could you not know how embarrassing that would be for me?  Now people will think you spank me”

“Melissa this is a costume party. We are all in character. Dagwood and Blondie are cartoon characters.  Nobody is going to think anything beyond that, but I have to admit there are times when I am so frustrated with you that I would like nothing better than to take you over my knee and blister your butt. This is one of those times”

The jar of cotton balls went sailing just as he was walking out the door. It hit him in the back. He turned around and told her to knock it off, calm down and get downstairs there was a party going on.  He could hear her cursing as he descended the stairs.

Mike rejoined the party and noticed Melissa about an hour or so later.  It was just prior to midnight and the votes were being tallied for the best costumes.  Blondie and Dagwood Bumstead won hand’s down but because he and Melissa were eliminated due to being Host and Hostess the couple with the next highest number of votes won.  When everyone unmasked Melissa couldn’t believe that no one made any comments to her about Dagwood’s little speech.  She was very relieved that Mike had been right.

After the party Mike and Melissa went to bed.  They had to be up early the next day because help was coming to assist them in the clean up.  Mike was just about asleep when Melissa asked him if there were times he really wanted to spank her.  He told her that there was many a time he felt it would have been beneficial to both of them.  She asked him to give her examples.  For instance he said when they would argue and then didn’t talk for days, or when she would be angry with him and wouldn’t tell him why; or when she would throw a tantrum like tonight and hurl things at him. He said he was sure there were plenty more times but those were the ones uppermost in his mind. Melissa just “hmpffed” and gave him a kiss good night.

Several weeks later they joined friends for dinner and cards.  Sometime during the evening Mike noticed that Melissa had gone “quiet”.  As the evening continued everyone seemed to be having fun and didn’t notice Melissa’s behavior.  On the way home he asked her what was wrong.  At first she didn’t respond at all.  When he asked her again her usual “nothing” response set him on edge.  He asked her if she remembered their conversation on Halloween.  She didn’t answer.  He didn’t ask again but he made up his mind how he was going to respond.  His palm was itchy and this time it was going to get scratched.
When they got home he went upstairs and Melissa stayed downstairs.  When she came up to bed she was surprised that Mike was still awake.

“I’ve been waiting for you” he said

“What for, I am certainly not going to make love to you tonight after what you did.” Melissa said

He said he didn’t know what he did that upset her but he was quite sure there would be no lovemaking after what he had planned.  With that he pulled her down over his lap, lifted her skirt and removed her panties.  He started spanking her.

She couldn’t believe this was happening and was sputtering “just what did he think he was doing”.

“Something I should have done years ago” he replied as his hand continued to make an impression on her beautiful butt changing the color from pearly white to a lovely shade of red.

She was fighting him tooth and nail and he just kept pummeling her posterior.  When she finally relaxed he gave her a few more spanks and stopped.  She jumped up and began the spanking dance – jumping around and rubbing her butt.  When she stopped dancing around he went over to her, wrapped his arms around her and hugged her tight.  He wasn’t sure what kind of response he would get but it was worth a try.  Much to his surprise she hugged him back and gave him a kiss he felt right down to his toes.

When the kiss ended, she moved her head back and said:

“What took you sooooo long?”

Posted by Aimless Rambling at 8:00 PM