Hope everyone enjoyed the holiday weekend.  Here in the Dallas area, Friday and Saturday were nice but Sunday turned out to be a rainy day.  Wouldn't be a bit surprised if the Easter Bunny didn't have to swim in some places.  Do hard boiled eggs float?  The creek in the back is more like a river and the pond overflowed again.  We had some excitement again too.

There was a bright flash and a horrific clap of thunder when lightening struck the electric gate opener out front.  It tripped a breaker and everything went dark. The good part was there was no tornadic activity today. 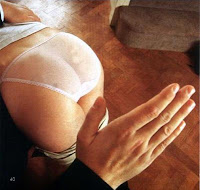 We finally were able to get in some alone time Saturday.  Everybody left to run errands and we figured we had about an hour and we made good use of the time.  I was quite warm when we were finished. It had been a long time between sessions and I was hollering STOP in no time.  Hubby tried several implements deciding which one gave him the most leverage while I was in the OTK position.  I think he decided the back scratcher got the most reaction from me.

We weren't able to dance our dance until later that night.  I had an appointment with the accupuncturist and we had to get on the road.

I pinched a nerve in my neck and finally couldn't stand it any more.  This is my first experience with being a voodoo doll and let me tell you it is not for the faint of heart.  I had needles sticking out everywhere.  The second session was even worse.  He used Rolfing and that hurt worse than any spanking I've ever received.  It's been two days and my chest and back and still sore where he really exerted pressure.  I think my neck is better or it just might be that the other places hurt more.
That's all for now.  Will have more aimless ramblings at a later day.     Have a great day.
Posted by Aimless Rambling at 4:00 PM